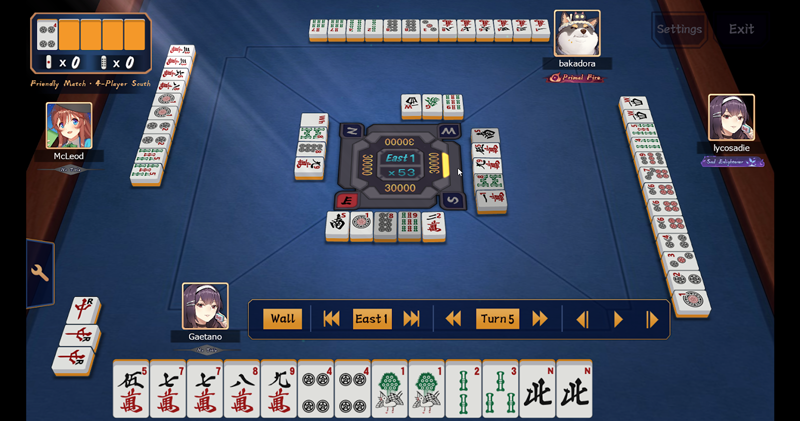 Up until this point, the hand moved on normally, and then there is this discard from South, which I feel is the first one to be a bit wasteful. After drawing 36s (which is the most likely way to tenpai) you end up with Riichi Nomi waiting on 8p (dora suji anyhow). Not the best wait or value. Instead of chasing Riichi Nomi head-on, keep this South, throw your souzu ryanmen and aim for Hon Itsu + Dora/Ittsuu/South - it is better value as you keep the chance for open mangan, while only giving up the chance of closed Riichi Nomi in exchange. It seems counterintuitive to throw ryanmen waits away, but when you gave realistic value in exchange it's alright. 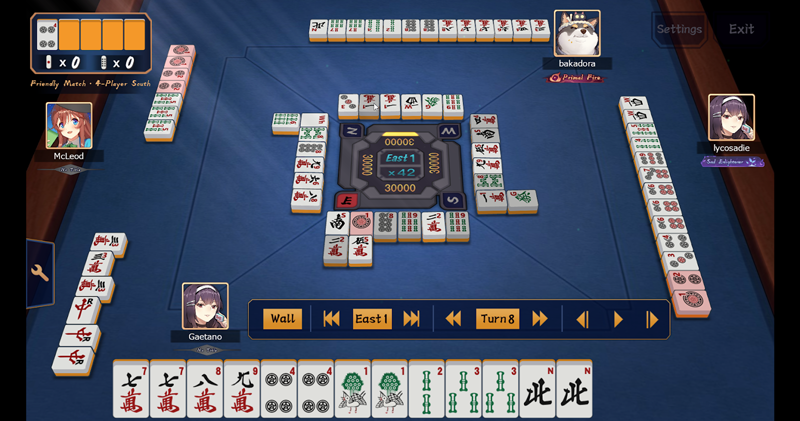 This 3p discard from West is also a mystery. North has already opened up twice and looking at the discards, he looks fast. It is not the time to throw a dora connector to him, while also denying yourself of using the Dora for yourself and other nearby tiles. 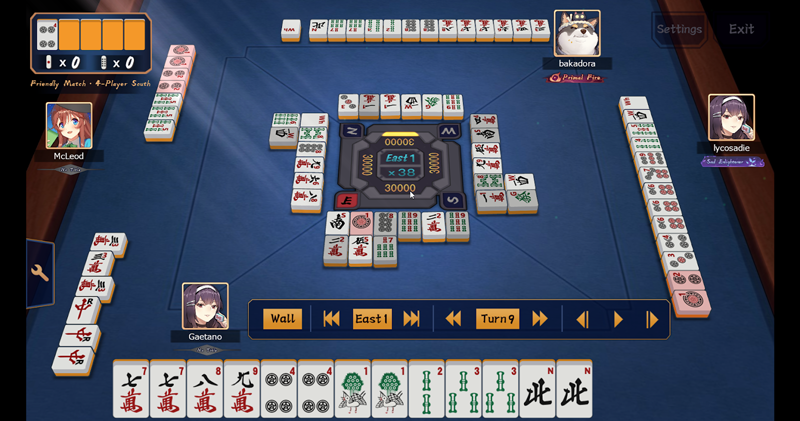 South Folds with West after drawing Haku - this is not good. Keep your 1 shanten, discard Haku as it is safe vs North; you can fold with your Wests later on. 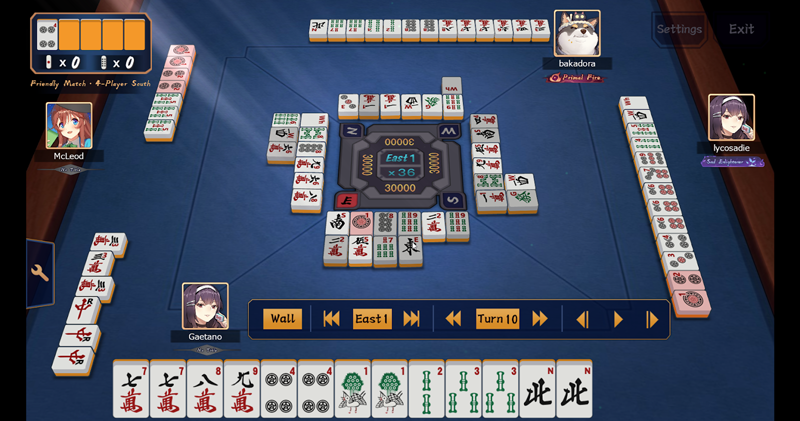 East is alive, and quite possibly Mangan if it hits vs North, while you are still 1 shanten of guaranteed poor shape (either shanpon or tanki). Even if you are dealer this is not a good investment. You can either do with 9m and keep Chii Toi Tsu 1 shanten, or go with 7m which is relatively safe and go for a mentsu hand, then check if you can discard this East later on once you've confirmed your tenpai. Whichever way you choose is okay, but this is East is a little bit too much too soon

For the West player, bakadora, I don't understand why you insist on losing your hand useful tiles (in this case, denying 3s for 234) while discarding usually dangerous tiles vs North at the same time. Is there a reason? 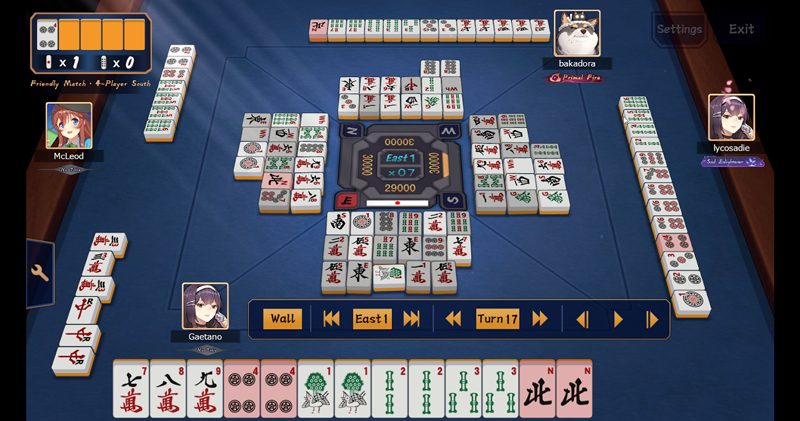 South's 4s discard here is outright a mistake. 1p is safe, 4s isn't safe (and I'm not going to count but just on plain sight I even dare to venture 1p even has a better chance for tenpai in the end). While 4s is not out on the board, even seeing 1 and 7 discarded doesn't make 4s a safe tile. In fact, it is fairly common to keep 135 from a 1357 shape, then when you get to tenpai with a 135 shape you get to choose if you want to wait on 4 or on 2. If the 5 you hold is red or if you have sanshoku, it is not rare to choose to wait on the 4 instead. Meaning, that you are even risking dealing into an expensive hand, for no reason. 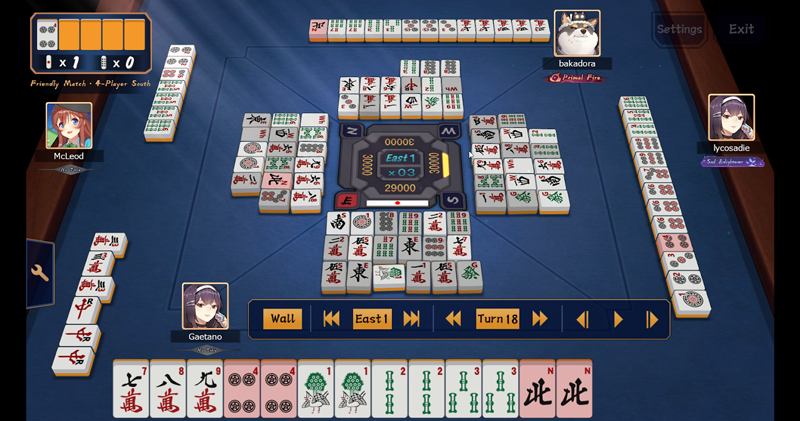 Again picking on South player, I'm sorry, but it's important: 2s is a dangerous tile, you have safe tiles, you are NOTEN meaning you cannot win points, and you have no draws left meaning you most likely cannot get tenpai (kamicha is haitei too so you don't even have a chance to chi). Please, choose your battles more wisely! 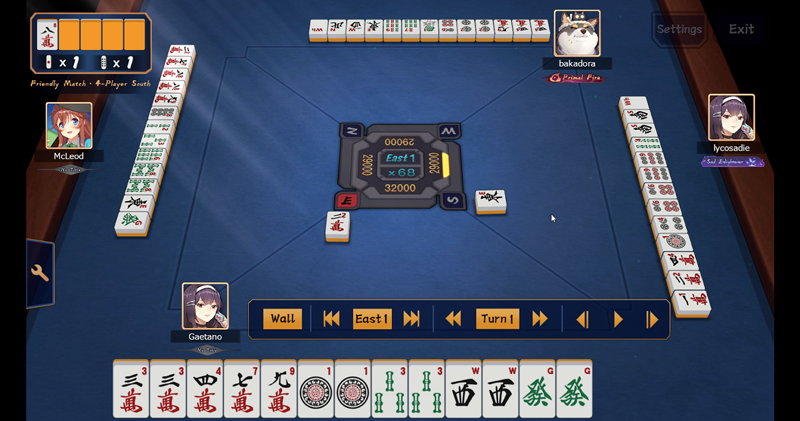 South player again, 1m and look at hon itsu at the beginning. 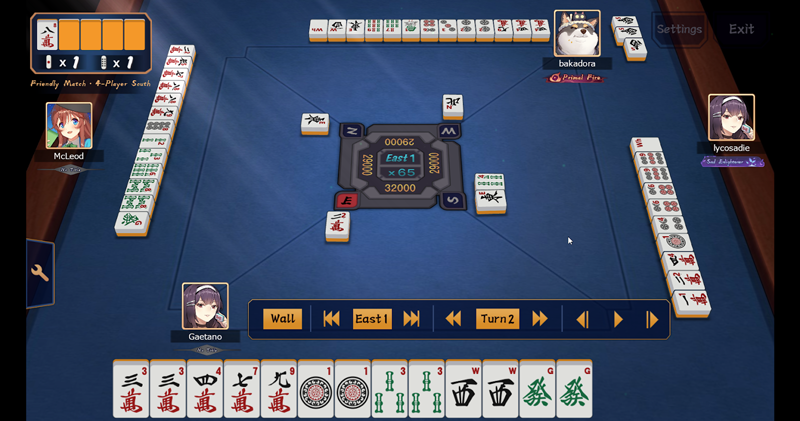 After calling Pon on South, still throw 1m and look at Hon Itsu or ryanmen around souzu.

PIC 10 At this point I have zero idea what West is doing throwing away a pair of 2p instead of going for Chii Toi Tsu. I have no idea what he is going for 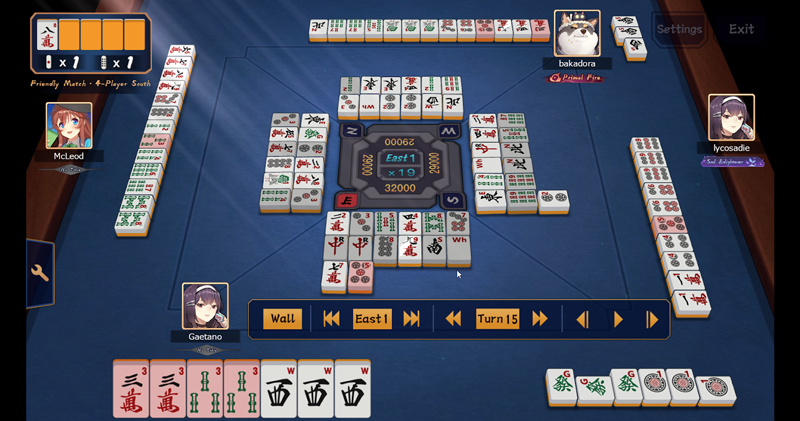 This 5p is unfortunate, but unavoidable. There is nothing to do here but discard it and be thankful South's hand didn't include Hon Itsu. 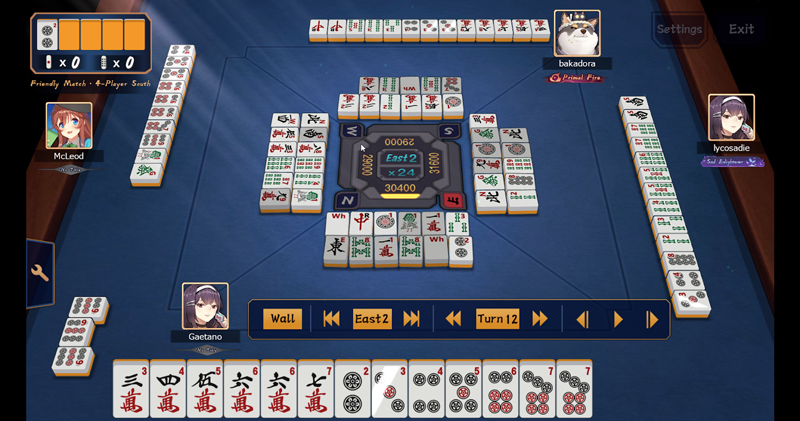 Long story short, the right discard is 7p. North's mistake here is actually an interesting one.

It is true that in a vacuum, 2p would normally be wider than 7p (by 4 tiles, 46 tiles to tenpai vs 42). However, in this case, there's some important factors to consider:

-Four 1p are already out, so the 147p wait isn't that appetizing, (even if 1p were alive, it also loses Tan Yao anyway)

-You are already furiten for 1p anyway so it's even less appealing. 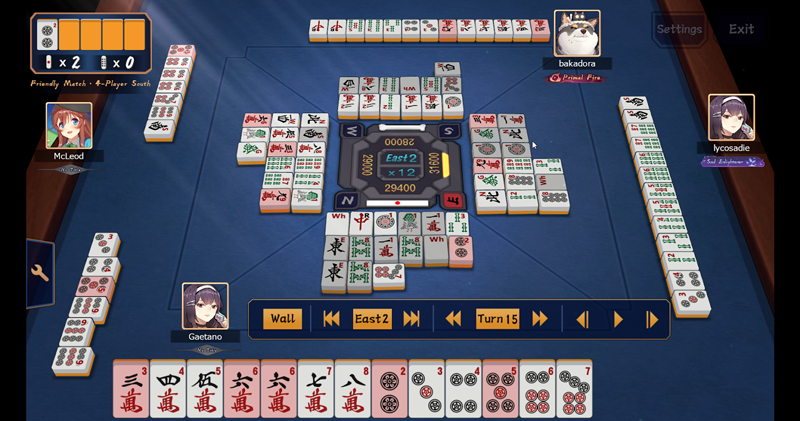 This is such a prime chance for East to Riichi, it feels almost like a sin not to. 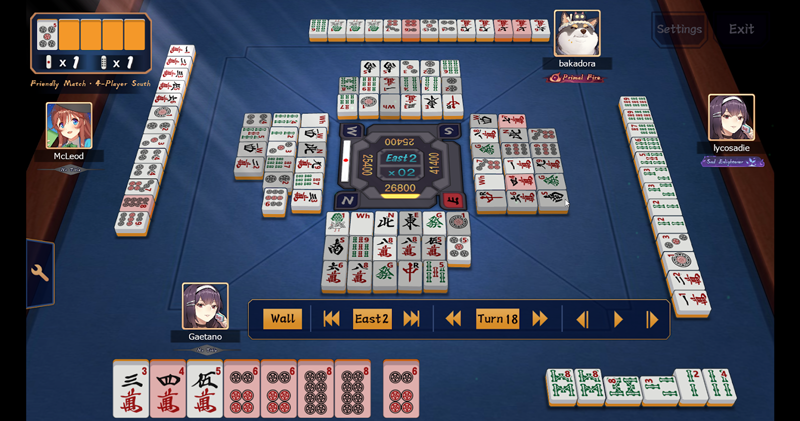 North: Perfect discard order, the decision making was very sound. Timing to call tiles, then choosing the wait (47p vs 68p don't change that much in winning % but the later has mangan chance, so it's a really good choice given the situation!) and also the push/pull judgment was on point (it probably wasn't easy to push ippatsu vs that riichi but it's the correct choice!)

East: A mahjong proverb I heard, fixating from the beginning on 123 or 789 sanshoku is setting yourself up for failure

South: I still don't know where you are directing your hands in the early game. Try some tenari or Tile Efficiency exercises, and aim to see how much you can improve your average Riichi turn. 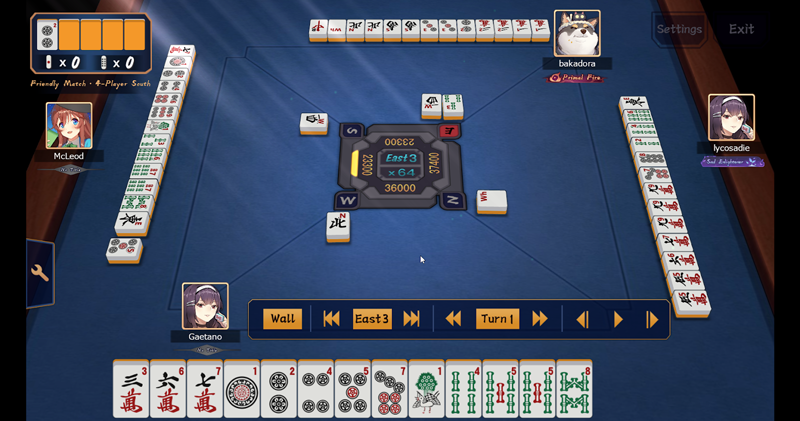 East: Chii Toi 1 shanten at the moment. Of course you will go for toitoi because most of your pairs are easy to call and you have a dora pair too, BUT at this point you are Chii Toi 1 shanten so I'd keep West instead of the dora indicator 2p. 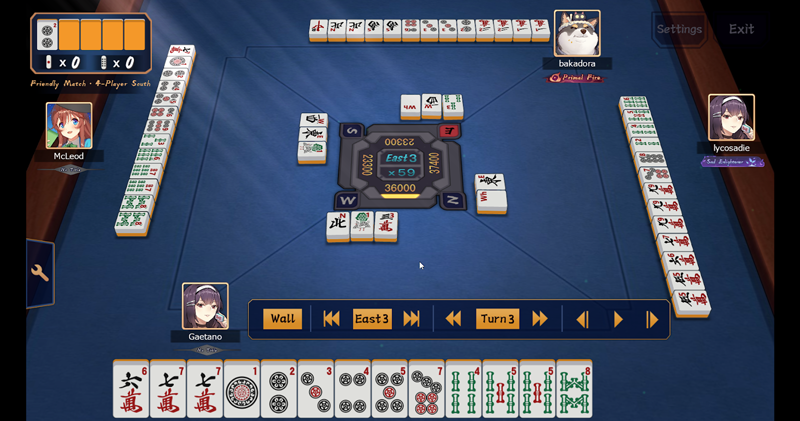 3m is a better tile to keep than 8s; with 455s 8s is redundant, and I'd still look at 345 sanshoku far in the distance, along mentanpin. 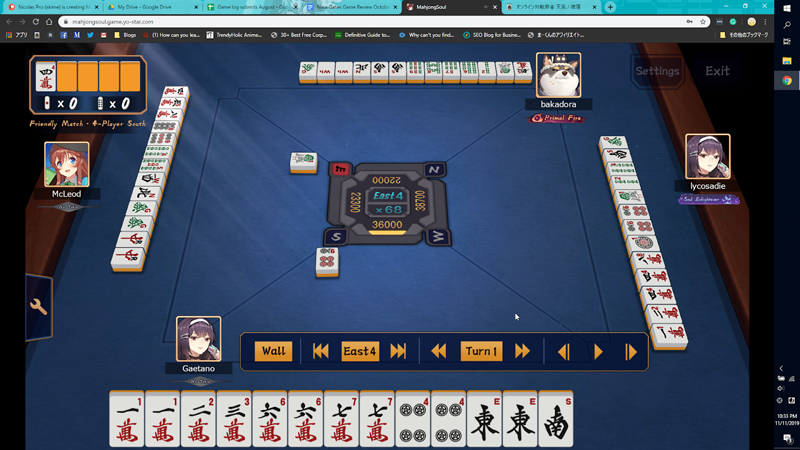 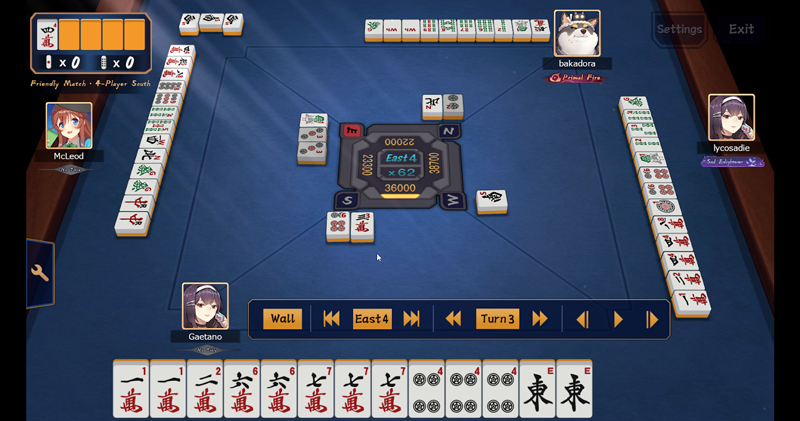 Nice 3m! This is only playable because it's very early on and you have no dora - excellent sense of avoiding Riichi Nomi. 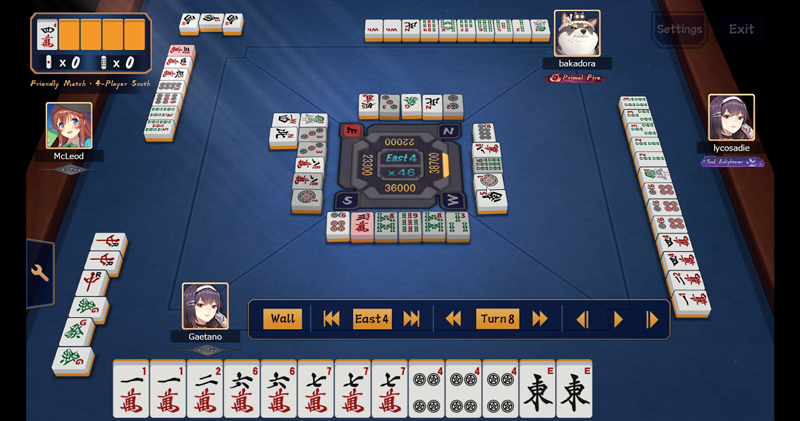 Everyone, all four, were doing very well! Up until the point West decides to play a riichi nomi worst shape vs Hatsu pon Chun pon without seeing the Haku anywhere. While in the lead! This is the easiest way to throw leads away. 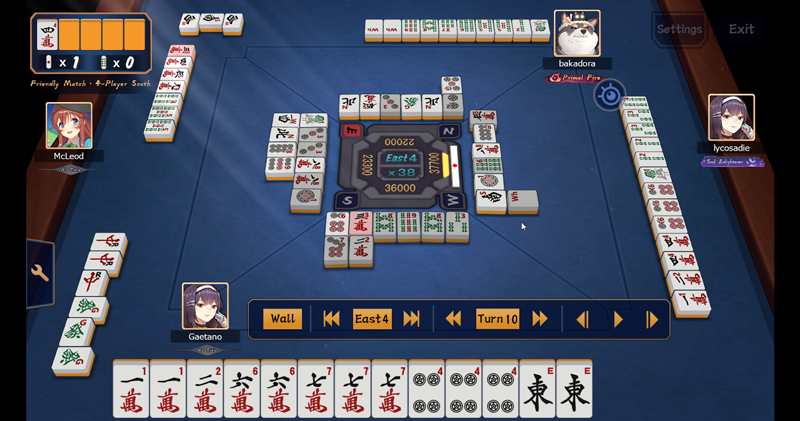 I want to ask North why he wouldn't take Haku pon for tenpai safely (discard 6s). I mean, there is a strategical meaning behind not showing everybody where all the Haku are, but I would like to know what he was considering 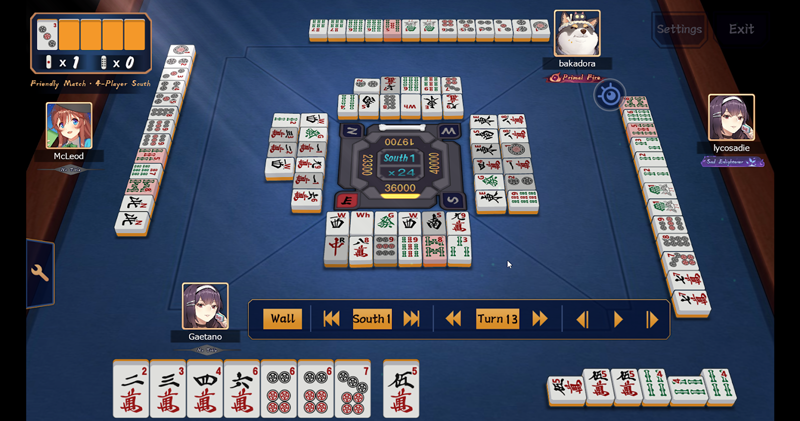 The thing you want the least to happen while you are making calls this desperate without any dora: someone else calls Riichi while you're still not even tenpai - however you draw 5m! Best timing! So you can discard 7p to have a great 147m wait (tho you can't win on 1, they are mostly out anyway). 7m is blocked so it could be likely to get a quick win and cancel that Riichi and 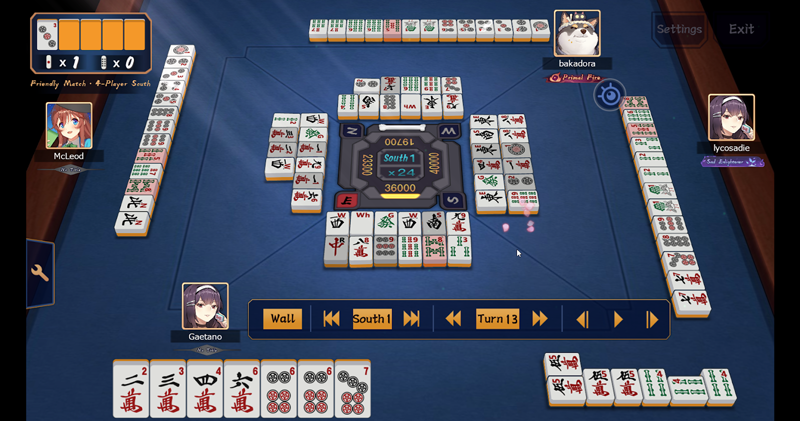 The possibility of chankan aside, you break up tenpai, draw from the wall perhaps a reasonably dangerous tile, and also increase West's likelihood to get more dora.

I don't see many bad plays from you but this one is a little bit off the wall. It's pretty crazy. 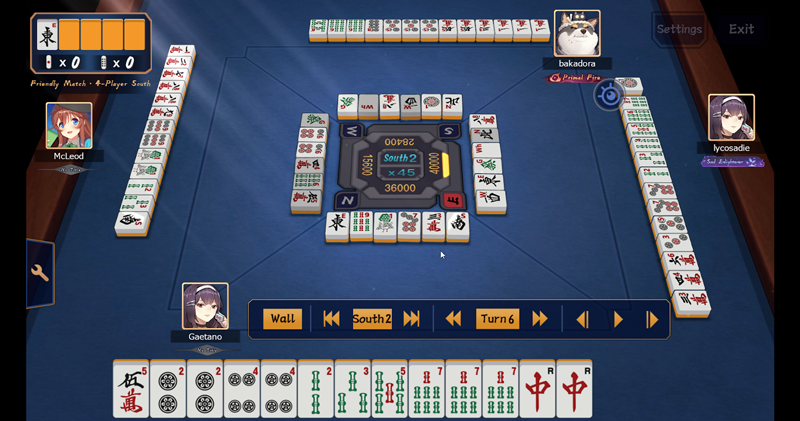 This is an odd time for discarding Yakuhai dora. I think 5s is alright here, but perhaps you were scared you couldn't hold onto it much longer. However, you probably have the most interest in piling it up at this point. 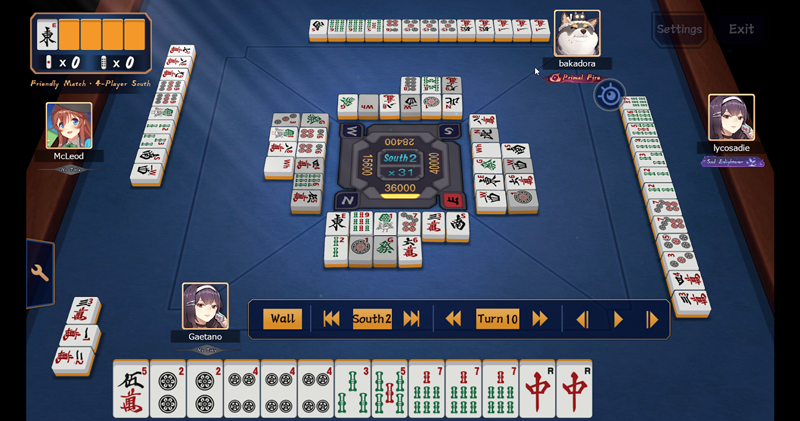 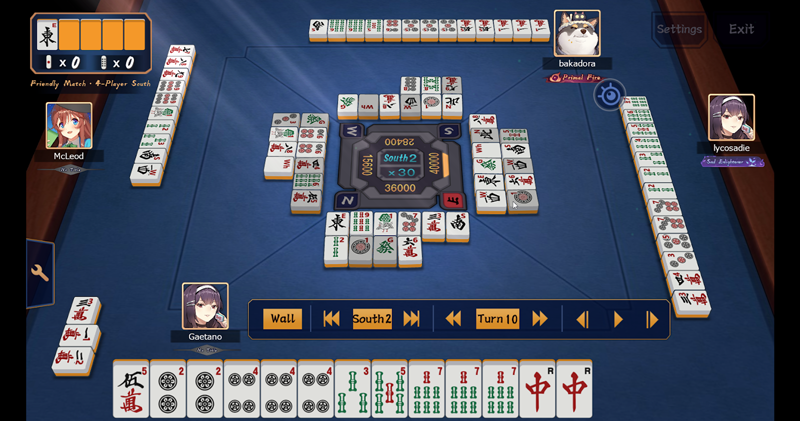 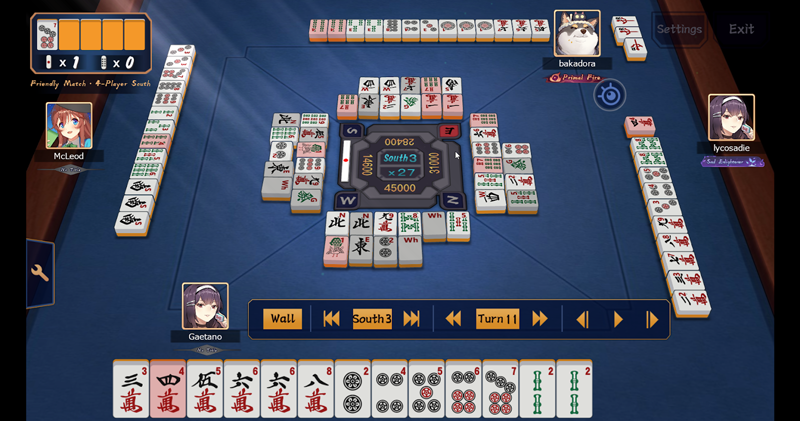 Everyone did alright this hand and anyone could have won it really. Nothing serious to point out here. Just reassuring: Furiten riichi isn't bad. The fact you're furiten is, but furiten riichi has a better winning chance than furiten dama. Always. Don't mind it! 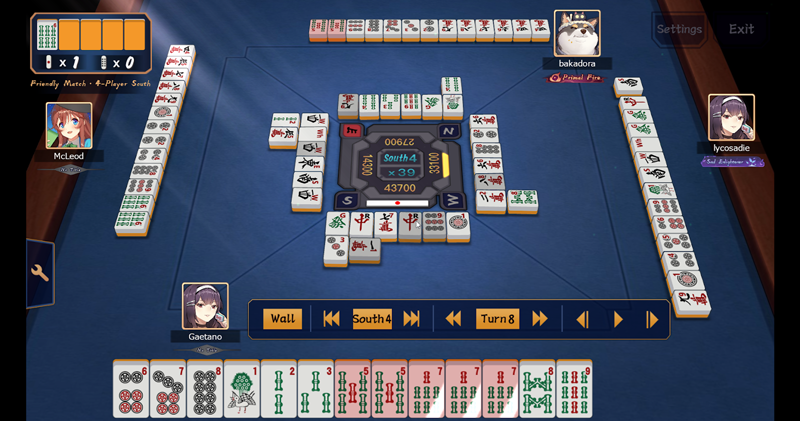 You only have to win the hand to win the game, so I'd have probably kept the 2p wait earlier on, getting rid of 5s instead. In the end you have a very difficult shape to win, throwing a Riichi stick on top of it, possibly giving away your 1st place when (not if, but when) you get counterattacked. Tsumogiri-riichi is almost always never correct anyway. 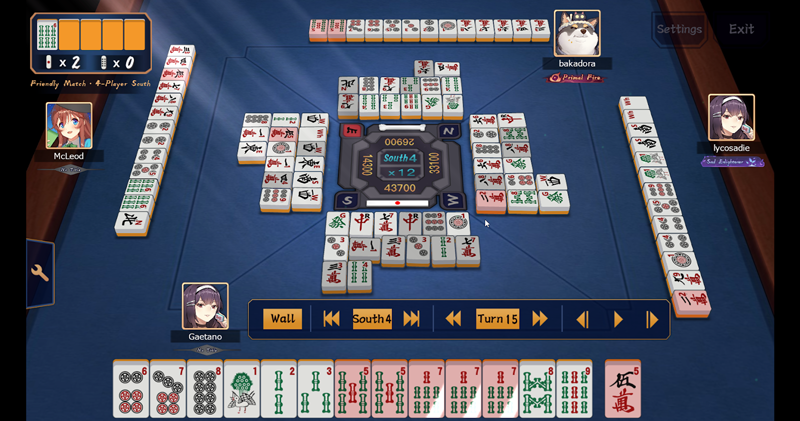 This time this was just a light, 2k deal in to North, but it could just as well have easily been 12k into the dealer. Once you are already 1st with some distance, shape and likelihood to win is much more important than value.

That was an interested match in the sense that I could see everyone's very well marked different playing styles and habits.

For Gaetano, I recommend not straying too much into crazy reads or gambles - your fundamental play is very good, so that at this point it will give you a much better return to just not make any mistakes, not giving other people chances.

For Lycosadie, I recommend to stop playing around the edges. Shapes like 124, 689, they are not good. Also Sanshoku around the edges or chanta hands aren't so good; instead look more at Hon Itsu hands.

For Bakadora, you have a good discard order when you want to, but sometimes in the early game you start with odd discards. There is no need to be odd, or to discard middle tiles so early on - follow a natural discard order and you will get to tenpai earlier and join more fights.

For McLeod, a very good general sense in general. I'd like to see you be more proactive and Riichi more, push a little more.

Thank you for your support and I hope this is helpful! It took a long time to review, so I'm sorry for the wait. If you have any followup questions, please let me know!

Good luck in your league games! 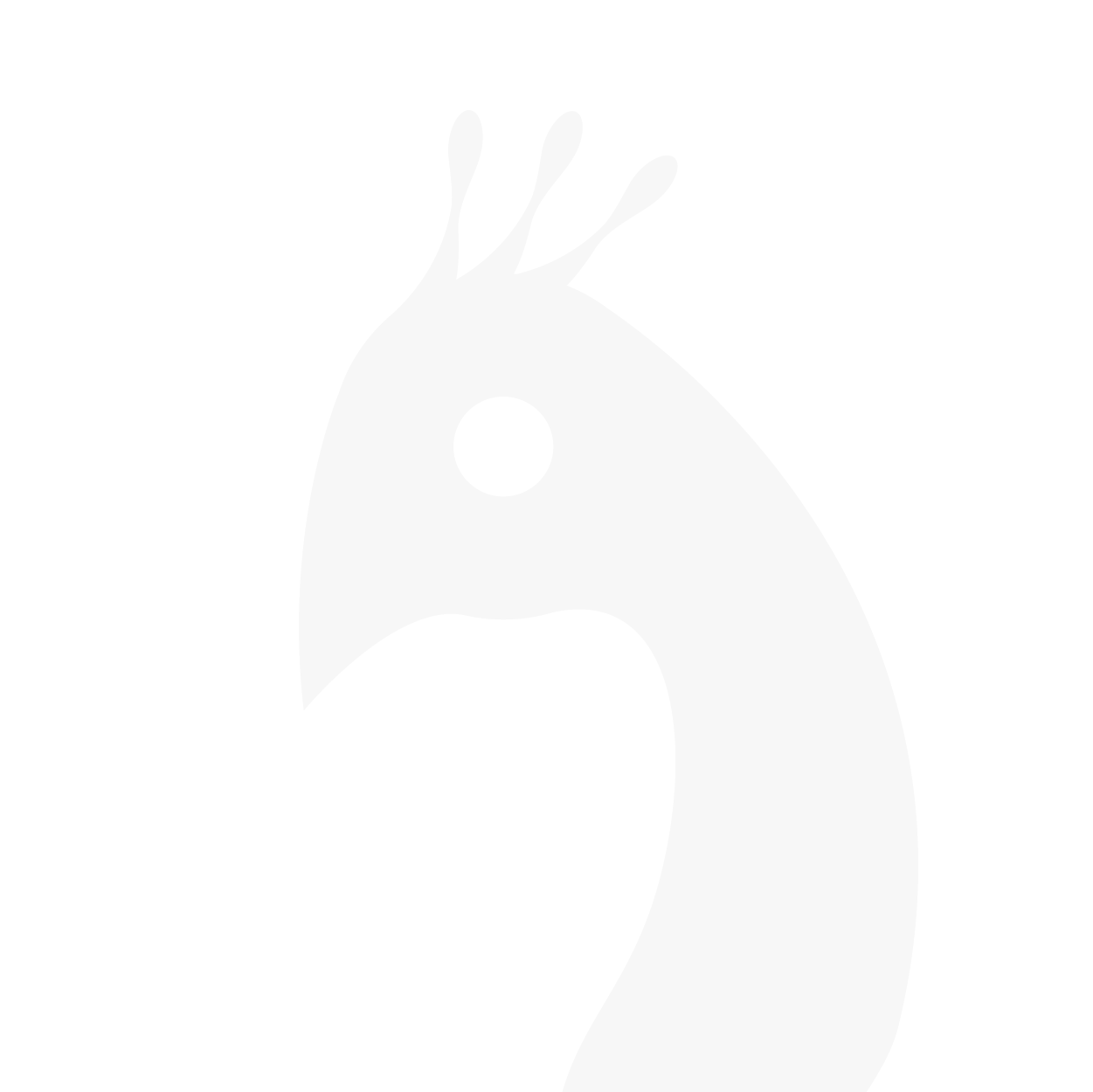